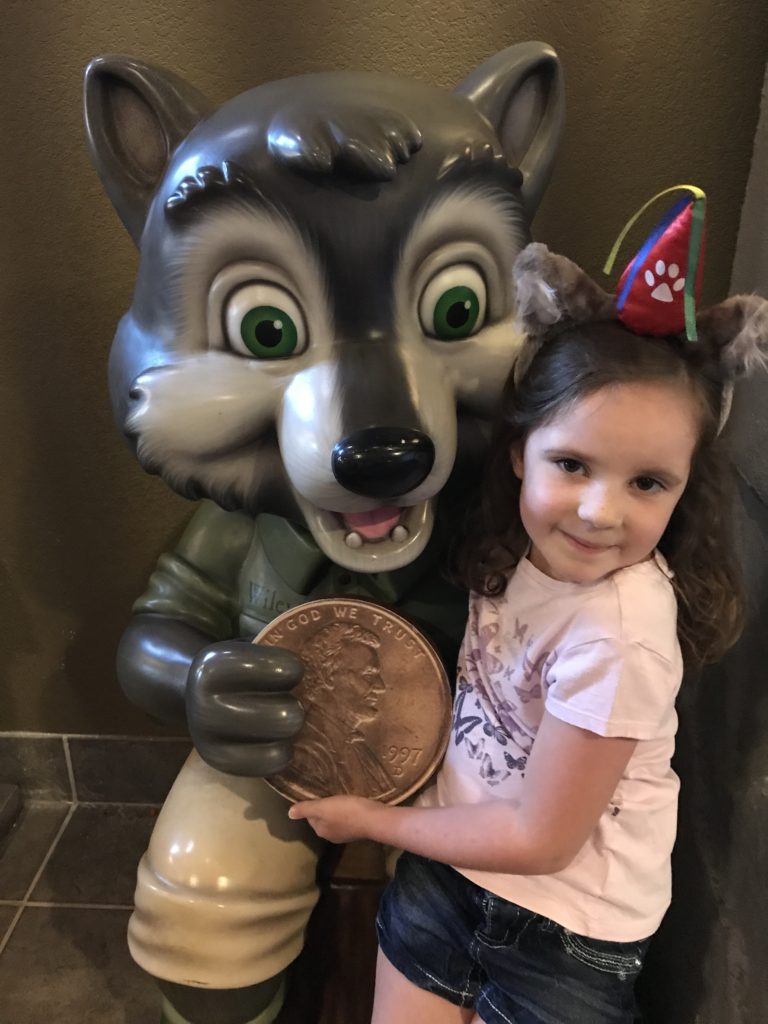 If anyone can tame a wolf – it is this child.

If you ever feel like you need a pat on the back for your parenting skills, spend a few days at a water park. I just spent the last hour telling my six year old how kind and sweet and polite she is after spending seventy two hours surrounded by a few hundred partially supervised, overly sweetened little monsters. Their parents were mostly encouraging the bad behavior by looking the other way when their kid cut in line and sprayed another kid in the face with a water gun. They are just kids being kids, learning how to be mean and get their way, learning how to look out for number one. The parents just leaned back with their beers and watched their little minis pouring buckets of water on unsuspecting parents, laughing right along.

I love watching my little girl in these environments because she seems to find her place pretty easily. She hangs out by the pool where there is a rope obstacle. She first shows off her skill by making it across and then cheers on a little girl behind her. She also spends a lot of time ordering her Dad and Grandpa to follow her down slide after slide and running up to get a spot in front of the big bucket of water that tips over every half hour. I stayed away from that area after witnessing my husband and daughter get pantsed by the 1,000 gallons of water rushing over them. The last thing I want on a family vacation is a wardrobe malfunction that simultaneously scars my daughter for life and sends my father into cardiac arrest.

Luckily, the wee one was more interested in video games and magic quest than she was in the water activities. The downside of this is that we end up spending half a weeks food budget trying to win a dollar store set of mermaid dolls. It’s like the rigged carnival games on steroids. The worst thing is that a year ago my daughter and her Dad spent a weekend at this water park and he somehow hit a jackpot on one of the ticket spitting video games. Since then my daughter thinks that every time she plays a game thousands of tickets will pour out to her at the end. I developed golf elbow earning seventy seven tickets at the skee ball machine while my Dad held on to the back of my daughter’s motorcycle steering her into first place at her motocross game. Carey Hart would have been appalled. 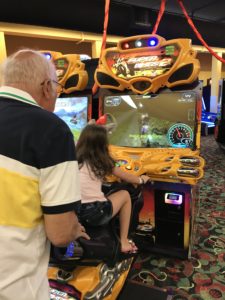 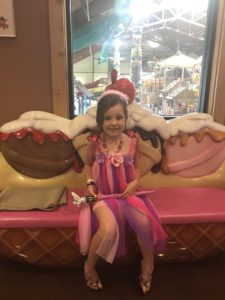 My Mom got in a little spa time with her little princess as well. It was supposed to be a party of three with Grandpa tagging along, but somehow he missed my Mom’s instructions on how to get down to the nail salon and ended up watching ESPN on the couch for an hour by himself. I don’t think Riley minded his absence since it allowed Grandma more time to lavish her with all things pink, sparkly and marked with a price tag. They even brought us all back a snack. They found Jelly Belly Bean Boozled Beans which are a bunch of fruity jelly beans mixed with dead fish, barf and dog food jelly beans. You don’t know what flavor you get until you try it because they look the same. Somehow my Dad got pretty much every nasty tasting jelly bean in the box. I think he finally gave up after the spoiled milk flavored jelly belly sent him running to the garbage can. I’m guessing the next time my Mom gives him the order to be someplace he’ll follow it better. Strangely, both my daughter and I liked the grass clippings jelly beans. I shouldn’t be surprised since we both also like seaweed.

I always return from these little family vacations really grateful for what I have. I don’t know if my daughter is aware that most grandparents are not as involved in the lives of their grandkids on the same level that my parents are. I don’t know a lot of Grandpas that still want to play the same way my Dad does, or a lot of dads that play the way my husband does. But, I am already feeling a little sorry for my daughter’s future husband because he is going to have a lot to live up to.