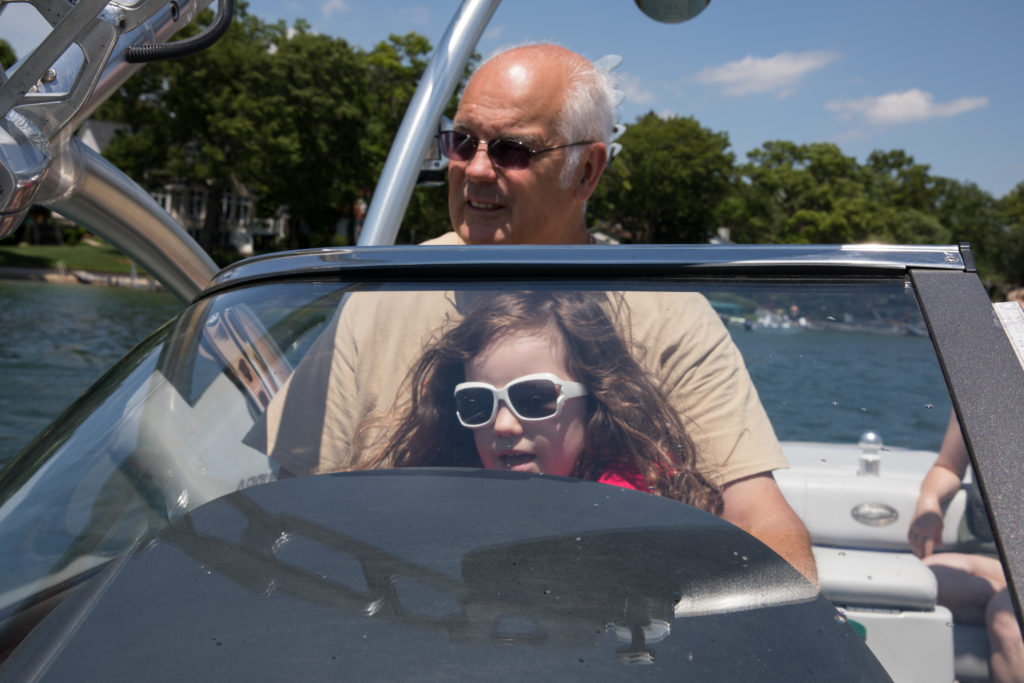 Someone has to sink this ship!

My Dad has been talking about owning a boat for a few years. For every birthday, father’s day and Christmas he has asked for a boat, and he has received a variety of small plastic toys in return. This started when my parents bought a house on a lake the same year my daughter was born. They bought a couple of wave runners that summer which they have utilized fairly frequently on sunny days since then. I ride them twice a summer, when we are bringing them into the water for the first time and when we are taking them out of the water for the winter. My husband and I are not really “lake” people. As a matter of fact, I don’t like swimming in lakes. At all. This is why I was not exactly overjoyed when my parents bought a house on a lake. They, however, have slowly been turning into “lake” people since then. And lake people own boats.

So my Dad finally bought a boat. And we all went out to the lake to go for a ride yesterday. I don’t know a thing about boats, but this one was shiny and sleek and looked fast, so right away I liked it. As we all embarked for our maiden voyage I realized that the life jacket we had just bought for the littlest passenger was still in the laundry room. I ran back to the house to get the vest, and when I returned a neighbor was walking down the dock. He was apparently coming to assist in getting our shiny new toy started. I guess the transition to “lake” person is still in process for the Old Man. They chatted a little bit about batteries and blowers which all sounded a lot like the teachers in the Charlie Brown cartoons, and we were finally on our way.

Apparently the boat lift is a little higher than my Dad would like it, so we all had to go to the back of the boat while my husband gave him a push out and jumped on. Good thing he has had some training in jumping into moving vehicles while trying to tag along on some of my Target runs. We pushed off and headed out for our little cruise around the lake. We trolled around for a few minutes looking at the houses until my mini-me yelled “go fast Grandpa!” He replied by racing the boat halfway across the lake. When we slowed down he said to my husband, who was sitting at the front of the boat, “you should stand up and say ‘I’m the king of the world.'” It would have been appropriate since we started taking on water like the Titanic a few minutes later. I climbed onto the front of the boat with my husband and child to bask in the sun as we traversed the lake. The three of us lazed like sea lions on the front end of the boat, with my daughter periodically dipping her arm overboard for a handful of water to splash us with.

Meanwhile, the captain was trying to figure out why his shoes were getting wet. He and my Mom took turns looking at the engine and leaning over the side of the boat to see if water was coming out of the holes like it was supposed to. Everything seemed to be functioning properly, yet water was still filling the bottom of the boat. What started as a wet carpet was now a small pool near the backseat. My husband quickly grabbed his camera and placed it on the seat furthest from the newly formed pond. I had almost forgotten that he had brought his very new, very expensive third eye to shoot some photos of our little sailor. I now had visions of him requesting she relinquish her life vest to wrap around his equipment once the boat started to go down. I mean, the kid can swim. I’m guessing he was kicking himself for letting go of that underwater camera housing unit he sold last year.

The water continued to rise as we putted along back to our dock for what seemed like a year. It was a race to see if we could make it back before the engine flooded and we conked out for good. I don’t know what screams “we are not lake people” louder than taking a boat out for thirty minutes and sinking it. I felt like we were all piled atop the little engine that could, but this was the little boat that said get off me you chlorine-loving city folk! I spent the last few minutes of our journey contemplating just how many people and animals had used the body of water we were slowly sinking into as their personal toilet. I was devising a plan to lose the swans that had been tailing us waiting for the wreckage feast, when I heard the captain declare “now, these yahoos have to be fishing right in front of our dock.”

We had made it back!  We were not going to sink. We got all the way to the dock and halfway onto the lift. We began to disembark in an awkward fashion since the boat was still a few feet away from the dock. My husband and Dad jumped off and helped my daughter and Mom out of the boat as I passed all of our bottles of water and bags over. I was left standing on the boat with the camera in one hand. I stood up on the seat and handed the bag to my husband who promptly marched it not only down the dock to dry land, but all the way up into the house. I stood on the seat for a moment watching. I wanted to be upset that he left me to fend for myself getting safely ashore, but I couldn’t muster up any anger. I know how much he loves that camera. I leapt off the boat and for once stuck the landing. My daughter followed my husband and Mom into the house declaring “that was the worst boat ride ever.”

My parents’ neighbor appeared to hear about our boat tour and when we told him about the titanic making it all the way around the lake he jumped in to help. The water drained out of the sides of the boat for double the length of time we spent on the boat. We eventually had to push it up onto the lift to get a look at the bottom. Strangely, after all the time I have spent doing anything I can to avoid dipping a toe into that perch brothel, I strolled right into the water. I ignored the minnows swirling around my knees and the sand oozing between my toes as I pulled the bow onto the lift. I know how much my Dad loves that boat. It turns out there was a broken hose. It will be an easy and quick fix hopefully. As it also turns out, we are turning into “lake” people. 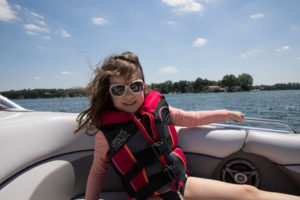 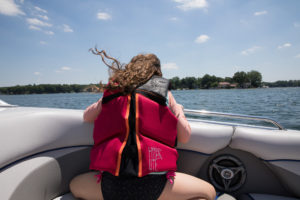