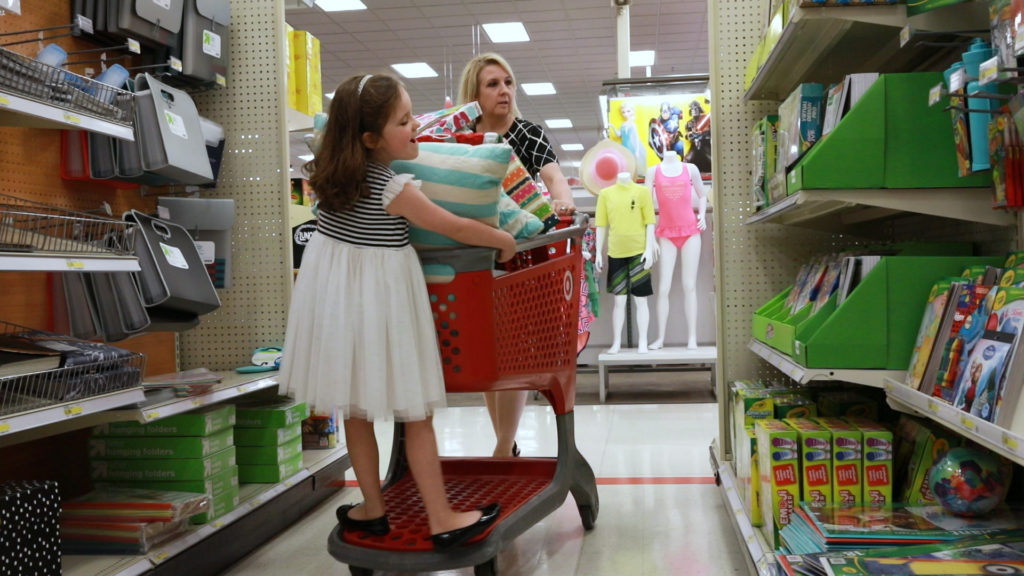 My husband and I have had fun filming. So much fun that we filmed an intro video. We wanted to incorporate all of the things that I do on a regular basis, so of course we had to film me shopping at Target. It is my second home after all. Seriously, when I got in my car after leaving the gym on Saturday, my GPS told me how long it would take to get to Target rather than my house! Filming at Target was kind of fun. My husband was a bit like a nature documentarian, following this big cat in her natural habitat. The only bummer was that he made me put back everything I had put in the cart. Apparently they were just props! What’s up with that? I don’t think I have ever walked out of Target without my arms weighed down with bags. I don’t work out my arms at the gym, these guns are strictly from lugging around shopping bags.

We walked around the store for a few minutes to find a good spot to film. I wanted to document me browsing in the office supply section since that is where I spend a lot of my Target shopping time. The toy section is right across the aisle where I pay off my daughter for being patient while I mentally organize my home office for a few minutes each week. I really spend the most time in the dollar section, but it was too busy to film there. Apparently that is a popular section. After a few laps around the store, the office supplies aisle was deemed to be the perfect filming location.

When my husband was positioning himself to film, he wasn’t really concerned with what was behind him. He set up and began filming as I walked around the corner. When a family set up camp at the end of the aisle to check the prices on every item in their cart, it was time to change directions. He said “good, this way is even better for the background.” I didn’t pay all that much attention until I rounded the corner and found a man glaring back and forth between the back of my husband’s head and the children’s clothing department where there stood a couple of child-size mannequins clad in bathing suits. Oh yes, this was clearly the better direction. The guy standing behind my husband had no idea he was filming a mom and daughter shopping. He walked up on a dude standing behind a pole with a video camera aimed right at the children’s swimwear.

This is the type of thing that happens to my husband a lot. He is usually doing something totally benign and it appears as if he is a total creep. It is usually something I have asked him to do. It’s a wonder he helps me with this stuff at all anymore. He must really love me… or filming.