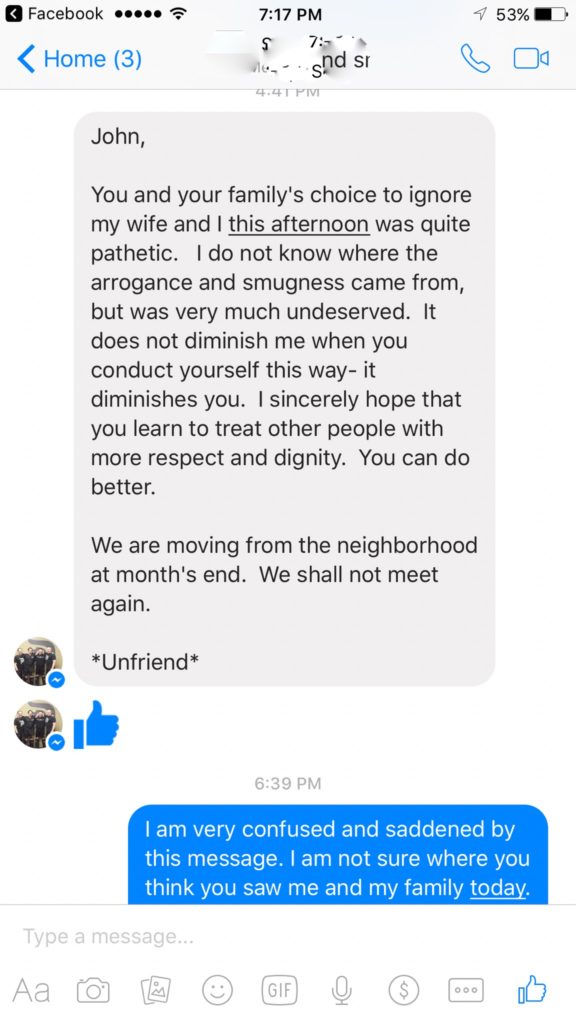 They must think they are really awesome!

Social media is really making people crazy. My husband received this message yesterday from a guy who lives in our neighborhood. We had taken a walk up to the elementary school near our house since it was such a nice day. We played, slid, swung and ran for an hour and walked back home. Several hours later, after returning from the store, my husband showed me his phone. I was really confused because I didn’t remember seeing this guy’s family at the school. I didn’t remember seeing them at Target either. This is the problem with being oblivious to what is going on around you – people think you are a stuck up A-hole.

In any given day I encounter a lot of people. I walk my daughter into school where I say hello to the portress (by name usually), a bunch of other parents and teachers (whose names I have memorized) and a handful of other students. I walk through my office building, the gym, grocery store and church, Costco, Target, Michael’s and a handful of other stores all on a weekly basis. We don’t live in New York City but we also don’t live in Mayberry. I know my husband encounters at least as many people in a day as I do. The guy who sent this message is not a guy we have seen at any of these places in the last week or month. In fact, I’m pretty sure the last time we saw him and his family was at a neighborhood party over a year ago. They invited us to their son’s first birthday party five years ago and we have seen them at other people’s houses a handful of times since then, but I could literally count on my hands the amount of conversations we have had over the last six years. Strangely, I do remember him because he was also a little weird and socially awkward. I couldn’t pick his wife out of a line up though, having met her on maybe three occasions.

We are a weird family. We are kind of socially awkward and we don’t hang out with a lot of people. We are always on the outskirts of school picnics and neighborhood parties. It takes awhile to get to know us and once you do you realize we are as weird as you thought we were. That is probably why people remember us. Unfortunately, we are bad with names and faces. We spend a lot of time trying to remember the names of the parents of our daughter’s classmates. I even printed a list that I carry in my purse because I feel like a jerk when I forget people’s names. You would think one of us would be good at this stuff, but we aren’t.

I know what it is to feel like you are looking in on other people being friends and having fun and not being part of it. I really do try to find the other people who are doing the same thing as me and talk to them and help them join whatever group it is we are in. I figure if I can’t do it myself, maybe I can at least help someone else feel less awkward. The guy who sent this message was the dad in one of the families on the outside of our neighborhood group and I remember trying to include him in gatherings years ago because I knew what it felt like to be him. I remember when he first started coming around and some of the other parents calling him weird. He was someone I could relate to for sure.

I think social media has blurred a lot of lines when it comes to knowing someone. We see photos of people and think that we know the person. A few years ago my daughter ran up to a little girl at her school and hugged her saying “Hi Willow”. When I walked over, the girl’s Mom introduced herself and her daughter (whose name was not Willow). When I asked my daughter why she had thought the girl’s name was Willow she said it was the girl from my phone. I realized that she had seen a video I showed her of Pink & Carey Hart’s little girl riding a motorcycle online. I follow Carey Hart on Instagram and show my daughter the pictures of his little girl because they are about the same age and both pretty cool little kids. My daughter was four when this happened, but she still remembers the cool little girl on the motorcycle and thinks they should be friends based on what she has seen. She is a child so it’s understandable that she could get confused about who she knows in life and who she is aware of because she has seen them on the internet.

My husband really is a saint. My response to this kind of message would probably have been a giant middle finger and a “good riddance”. Not John. He responded with a very nice message that he was sorry if he offended this guy and it was not his intention to be a jerk. My husband has been cursed with being both good looking and shy. It makes people think he is a jerk because of course if you are attractive you should also be outgoing right? He has spent the better part of his life trying to be more outgoing and it is just not who he is. He is a kind and gentle soul so I know it really bothers him when he thinks he hurt someone’s feelings.

After recollecting our walk home and another message from this soon-to-be-ex-neighbor we put the pieces of the puzzle together to reenact when this blow-off occurred. This man and his wife were walking their dog (without their two kids who are usually with them). We all approached an intersection. They waved as a car pulled up. I looked at them but was more concerned with the car that was in the intersection since we were about to cross the street with our six year old who doesn’t want to hold my hand because she is a big girl. The driver of the car rolled down their window and said something to the dog walkers. I turned back to my daughter. The dog walkers obviously weren’t waving at us, they were waving at the car. Good thing I didn’t wave back like I was going to or I would have looked like an idiot. The car turned out into traffic, the dog walkers turned into the neighborhood and we crossed the street.

Apparently they were waving at us. Lesson learned – look like an idiot and wave even if you don’t know if the wave is meant for you. It may save your husband from getting an unwarranted nasty message.