They Call it Medicine for a Reason 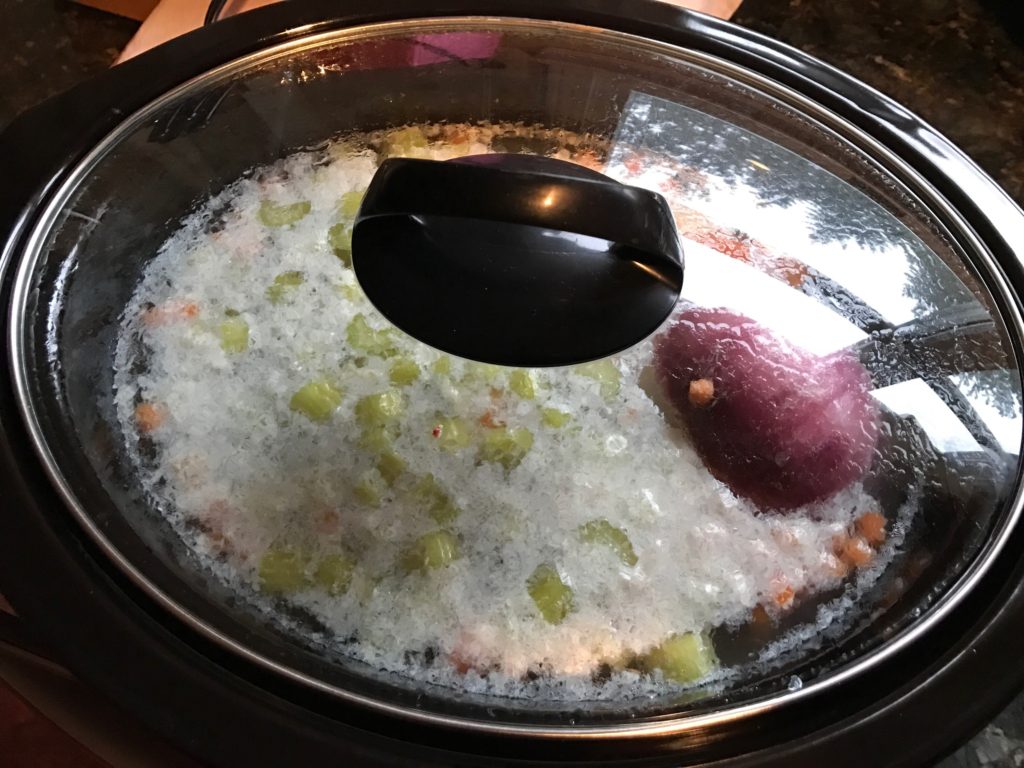 I attempted to make homemade chicken noodle soup the other night. It’s been quite some time since I have actually cooked anything. I am not a great cook. I am a master of salads but heated food it a challenge for me. I have set two stoves on fire in my life. Yes, two stoves. My husband and I used to cook together a lot and when I got pregnant he took over the cooking duties, banishing me from the kitchen. I have not made a meal that requires any form of heat since then. Our daughter will be six in a few weeks, so that is almost seven years I have avoided a stove!  I secretly think it took him that long to come up with a plan to never have to eat my cooking again. He is too nice to tell me something I made tastes terrible. He would probably weigh three hundred pounds if my cooking was any good so it’s probably for the best. He cooks all of our meals and he does it all on Sunday since we are busy during the week. We have a refrigerator full of containers packed with individual meals for the week. Last Sunday was a busy day and he was left with a package of chicken breasts uncooked. He asked me if I could do something with them on Tuesday since he was too busy to prepare them and they would soon go to waste. His exact words were “just look up a recipe, you can do it”. Famous last words.

I did look up a recipe, I even printed the recipe and took it to the kitchen to follow while adding all of the ingredients to the crock pot. I cut and chopped, measured and poured and left the pot for five hours as directed. When I returned it did not look like I expected but I didn’t panic. I looked back at my directions and continued on. I removed the onion as directed and tossed it down the garbage disposal. It said to remove the chicken and shred it. I did this and returned the chicken to the pot along with the noodles as indicated in the recipe. At this point I was supposed to let the noodles cook for twenty minutes and the soup would be done. I was excited to be twenty minutes away from homemade chicken noodle soup. It still didn’t look exactly like I expected it would look but the noodles weren’t cooked yet so I wasn’t that concerned. I had some things to do around the house as I usually do by nine at night so I busied myself as the noodles cooked.

One of the reasons I don’t cook is because I am easily distracted (thus the two stove fires). I get wrapped up in another project and twenty minutes turns into forty minutes. So when I walked back to the crock pot after forty minutes I was a little panicked knowing that I probably overcooked the pasta a little. When I lifted the lid to stir the soup I couldn’t find anything that resembled a shell. Either my chicken had eaten the noodles or they had overcooked to the point of decomposition. Since it was now close to my bedtime I decided to throw in the towel and see what I could do about the situation the next day. I packed up the “soup” and stored it in the refrigerator until I had time to handle it the following evening.

The following night I put the pot of goo on the stove and started the reheating process. The disintegrated noodles had turned the concoction into more of a stew-like consistency. I quickly added some water to try to thin it out. It seemed to work and it was starting to smell a bit more like what I remembered chicken noodle soup to smell like. The chicken however had gone from chunky shreds to fine strands. I hoped nobody would notice and added the noodles. I stood at the stove while the noodles boiled away in the soup. I was not about to take my eyes off the pot this time. And the old wives tail is not correct – a watched pot does in fact boil.

After fifteen minutes of me sweating over my boiling noodles my soup was finally ready for a taste. I put in a spoon and took a sip of broth. Not terrible I thought. Not good either. I added some more salt to try to give it a little flavor and laddled out a bowl for my daughter who was not so patiently waiting for dinner. As I placed the bowl in front of her she looked up a me with a look that could only be interpreted as “what the hell?!?” As she said grace I I said my own silent prayer and waited for her reaction. It came after one bite. “MOM – THIS IS GROSS! What is this?” I wasn’t even going to try to explain myself to a five year old. I walked over to the table, grabbed the bowl and eagerly asked “Do you want a salad?”

My husband had not over this entire process asked much about the chicken or what I had done with it. He did say that he wasn’t hungry when I asked if he would be having dinner with us that night. I quickly disposed of the evidence of my science project before he saw the finished product. He did snap a picture of the “soup” halfway through the cooking process unbeknownst to me. I think he is building evidence for his trial when he eventually kills me in my sleep. At least the chicken did not go to waste – he got a good laugh out of it!