I love cake. I also love to bake, but my execution kind of sucks. I always have an idea in my head of how something is going to turn out and it rarely turns out that way. It’s okay, I have fun baking and now my daughter and I bake together so it’s twice as much fun. I normally buy a cake for our big events. I am blessed to know an amazing baker. She was a neighbor for a short period of time and she has a daughter who is a month older than my daughter so we got them together for a play date when they lived in the neighborhood. We have been friends since then. Life happened which took my baking angel away for a time period, but now she is back in the area. We have remained connected through social media and when I am in need of a beautiful cake for a big event, I know who to call. I will bake a cake for a small family party but not for larger gatherings. We alternate the size of my daughter’s birthday parties from year to year. For the years she has big parties I don’t bake, but for the small family birthday celebrations I will attempt to bake a cake. 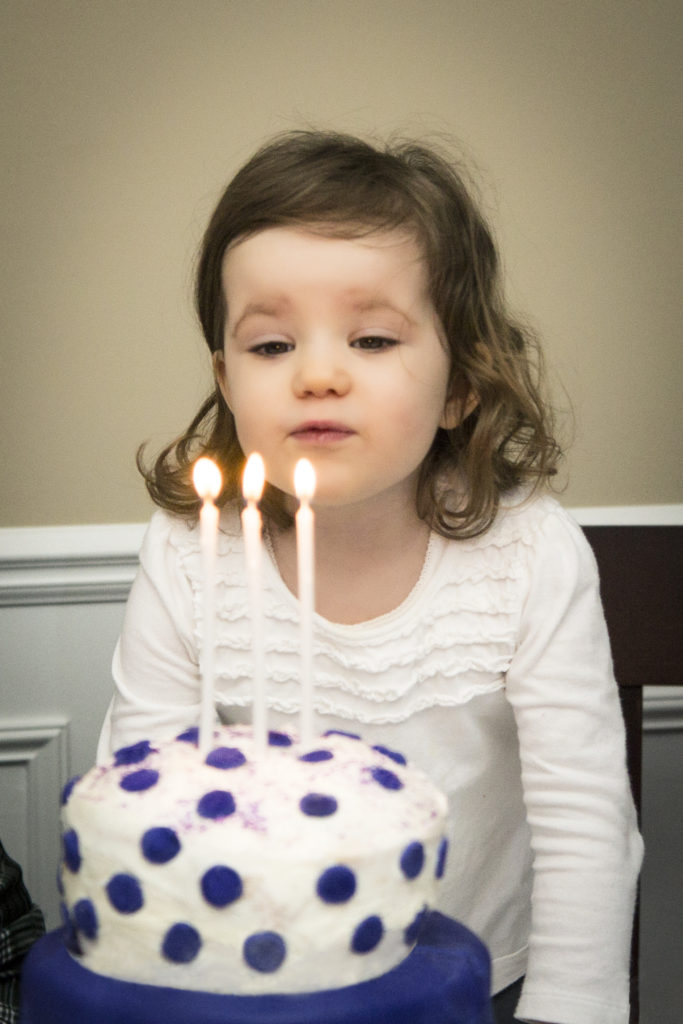 This year she wanted a Descendants themed cake and she wanted to help bake the cake as well as decorate it. No problem. Saturday would be spent baking and decorating and we would have fun together. I had everything prepared so that little miss impatient could walk right into the kitchen and start mixing. We got the first batch of cake going pretty quickly. I have to say that I am impressed with the ease my little six year old can crack an egg and separate the white from the yolk. She showed me how to do it the right way, back and forth from one side of the shell to the other. I showed her how I do it which is to crack the egg in my hand and hold the yolk while the whites drop into the bowl. My baking is truly hands on. She decided that the first batch should be blue so we added the food coloring and popped the cakes in the oven.

I only have one size of each pan so the cake has to bake in two batches. While the blue cakes baked we built a lego castle and prepared the second batch of batter for the oven, which was purple. While the blue cakes were cooling the smaller one fell apart. I didn’t panic, but I did add a little extra batter to the small purple cake to try to even it out. The bonus was we got to eat the cake that was not going to make it to the final cut. And, it was good cake!

Once the remaining three layers cooled I started building. The bottom layer went directly on the cake plate. I spread some lavender frosting on top of it and gently placed the second layer on top. It was looking very pretty and very pastel. At this point Riley was telling me that the frosting was not dark enough. She wanted purple, not lavender. As I was explaining that all of the frosting would have to be pastel colored and we could add the darker colors with the fondant I heard a thud. Half of the cake had fallen on the floor.

As I turned, my six year old screamed “You ruined the cake Mommy! You ruined my birthday!” Oh, the drama. I let her run upstairs and get herself together in her room as I tried to rebuild the cake. I felt like a potter on a pottery wheel trying to make the cake stand upright while slathering frosting all over it. This method did not work. Cake continued to fall to the floor with globs of frosting attached.

I know when to throw in the towel and declare defeat. This was the time. I grabbed a bunch of ramekins from the cupboard and scooped cake into each one. I cleaned off the cake stand and arranged the ramekins in a circle. The wee one had settled down enough to realize that I did not in fact ruin her birthday by messing up the cake. She helped frost and decorate the newly made cupcakes. 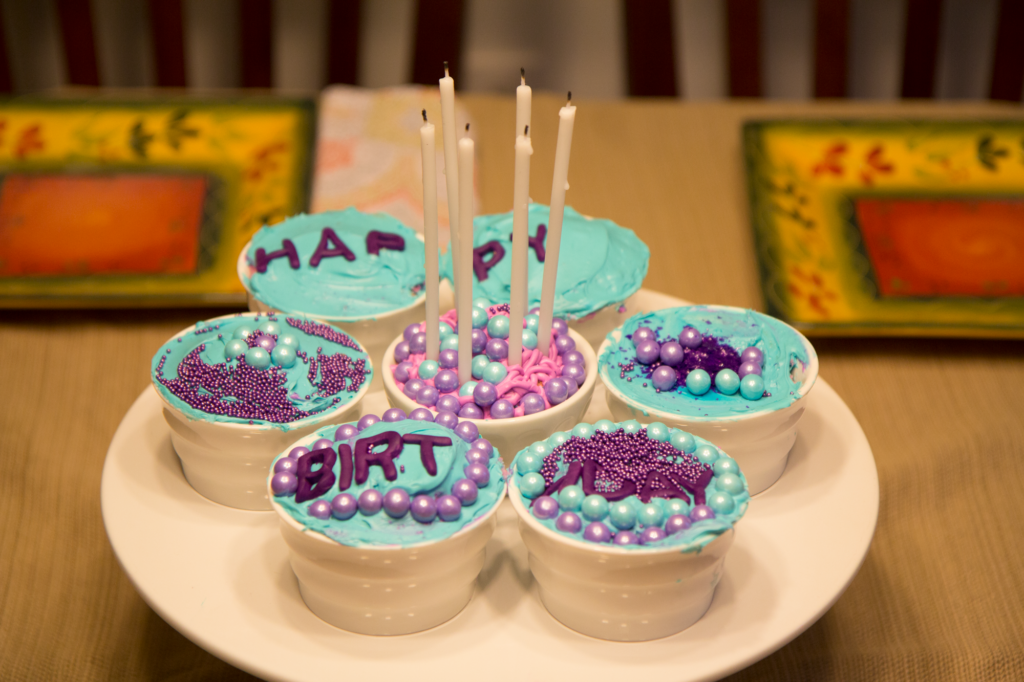 When the cake downsizes.

Sometimes things don’t turn out the way we picture it. That’s okay, Enjoy the process of making something. Who knew I could get life lessons baking a cake? 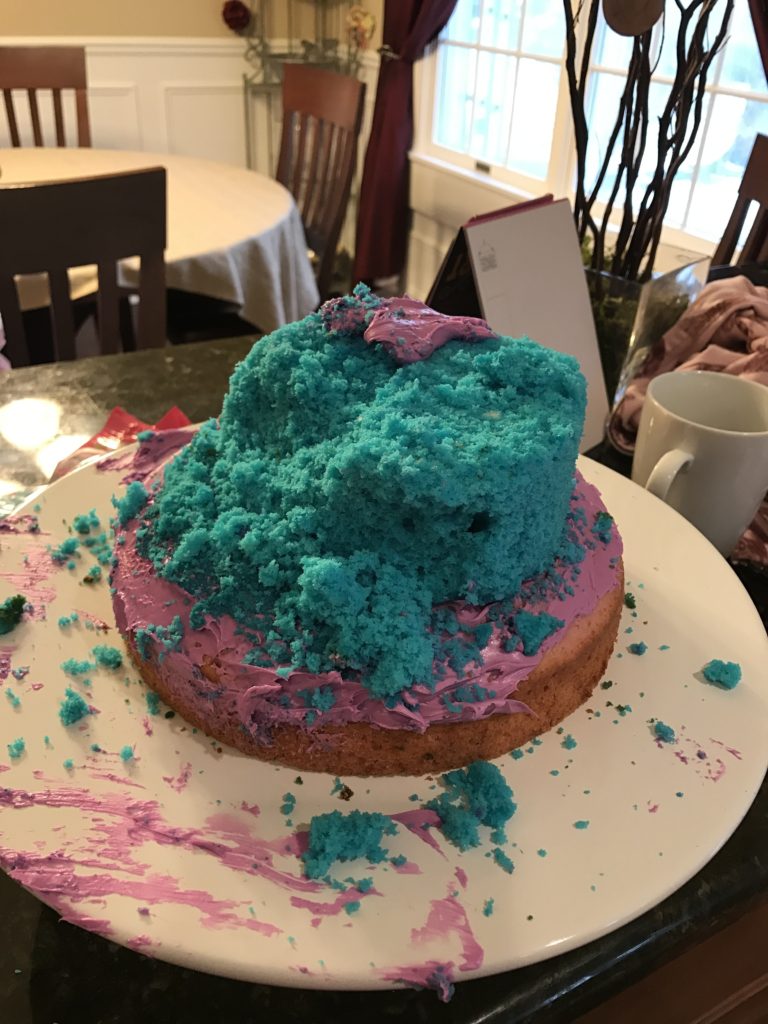 This is the BEFORE picture!