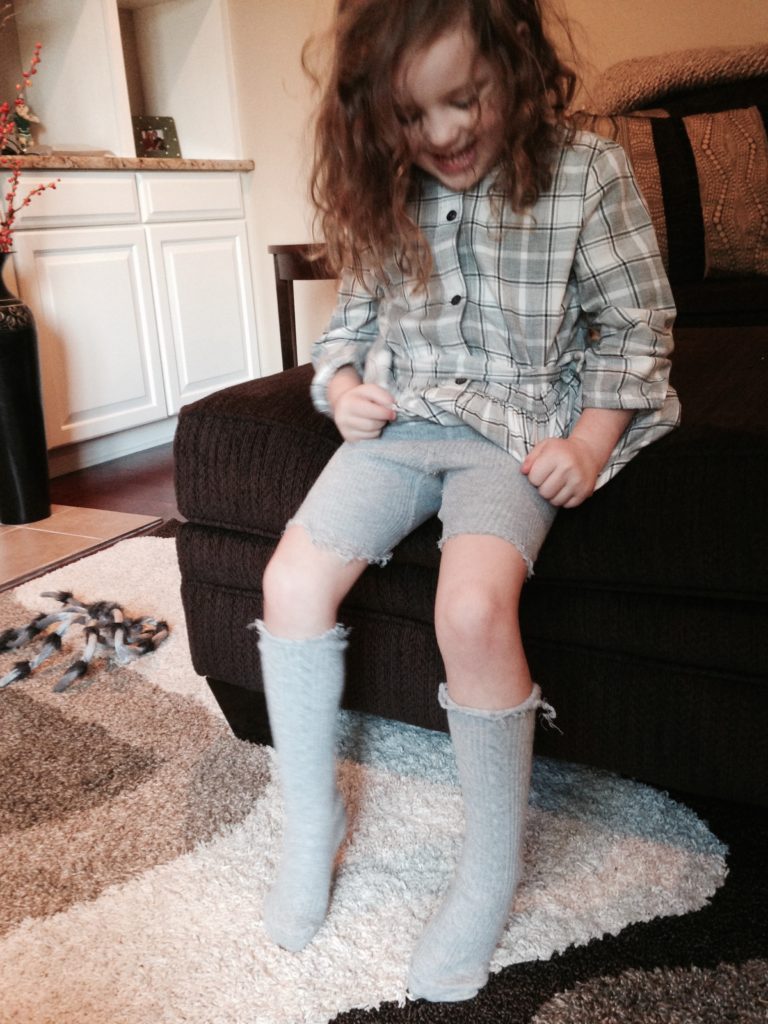 Every week my daughter comes home from her ballet/tap class with a run in her tights. This is usually caused by a jagged toenail that I neglected to file properly, so I can’t really blame it on her.  I gave up on filing her toenails the day I saw her with her foot in her mouth gnawing on her big toe. Clearly, she has the job covered. Last week when she came home with snags and runs on both legs of her tights I decided that the best way to remove the tights would be to cut them off. This way she could put a pair of pants on over her leotard and we could head straight to the gym which was the plan for the evening. She didn’t have to disrobe or even lift a finger this way. I ushered her into the kitchen while telling her about the very first time I cut clothing off of her.Babies poop a lot. Sometimes it gets messy. I had been warned about this when I was a new mother, so I had a diaper bag full of supplies. I was prepared for anything. I was actually a little excited about using all of the gadgets that I had skillfully acquired. I had odor stopping diaper disposal bags and wipes scented with lavender (for her butt) and eucalyptus (for her nose). I had extra diapers, clothes and sanitizers of all kinds – cloth, spray and gel. I even had scissors. My diaper bag was the equivalent of a soldier’s backpack and weighed about as much as a soldier. I carried it with me everywhere. And finally the day came that I could put it all to use.

I was in Babies-R-Us (probably in search of more supplies for my arsenal) with my daughter in tow. As I turned around to show her a toy I saw that look on her face as she nestled into the side of her stroller. It was the look that I saw every four or five hours each day that said “Mommy, I have a present for you and you are not going to like it!” I quickly headed for the bathroom that I knew was located in the back of the store, trying not to breathe in the fumes emanating from the poopmobile I was pushing in front of me. When I scooped her up out of her stroller I could feel something wet and hot on my hand. My little bundle of joy looked like she had been dropped in a Lollapalooza port-a-potty, with poop all the way up her back.

I quickly got to work, unloading supplies from my arsenal and readying the changing table like an operating table. Within minutes I had cut her onesie off her body (of course my favorite one from Janie & Jack) and wiped her down from head to toe with lavender scented wipes. She was redressed and ready to continue shopping in another few minutes and I had a garbage bag that weighed three times what my newly emptied diaper bag did five minutes prior. Good thing we were in a baby supply store! Sadly, this was not the last time I had to clean her up in such a way. My kid was a master pooper from the time she was born.

My now almost six year old daughter giggled as I told her this story. I held her top half with one hand as I pulled her leotard away from her body to cut her tights to pieces. As she laughed and spun away from me I pulled a piece of her tights down around her leg. As I pulled it away I noticed another piece of fabric hanging out from behind her butt. I pulled a little more and out came half of her underpants. I had successfully cut not only her tights but her underpants. Looking down I realized they were of course the underpants I had purchased literally the day before. I don’t think they were even 24 hours old.

My husband often asks me how it is possible to spend as much money as I do on clothes for my daughter. Next time he asks me I am going to refer him to this story. This my dear husband is exactly how I spend so much money on clothing for my little mini-me. Be grateful I am not also cutting my own clothing off when I am too lazy to change for the gym!