It’ll Eat You From the Inside Out 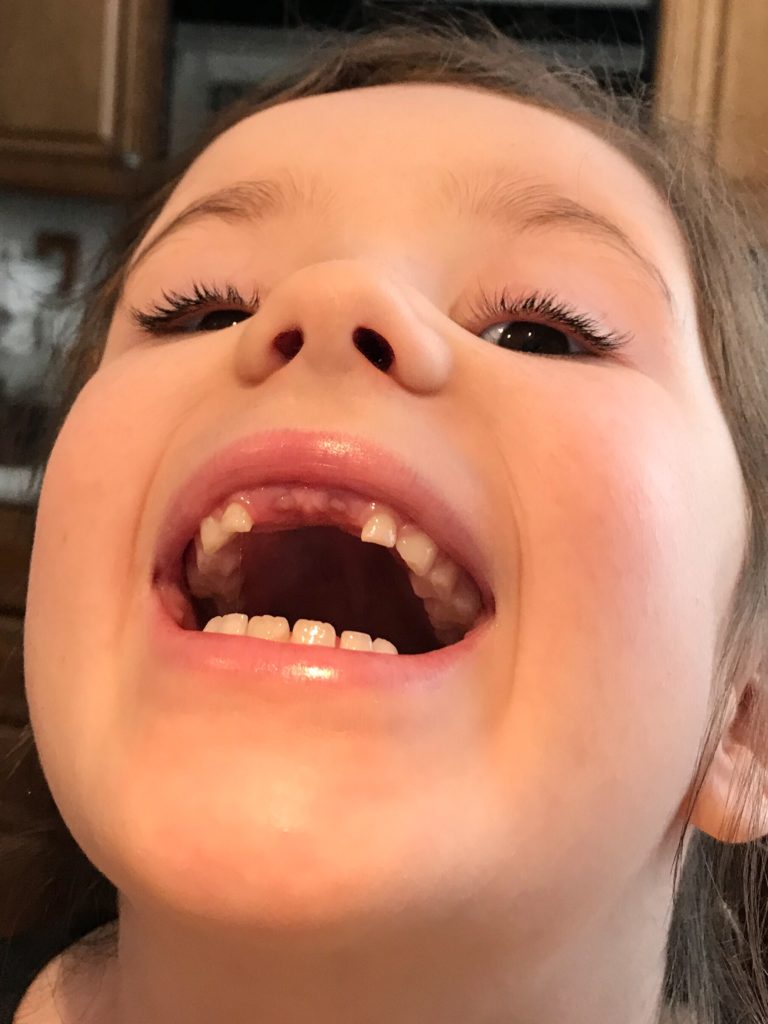 “I am on a curiosity voyage and I need my paddles to travel.”

Kids are kind of creepy. Once they finally stop spewing bodily fluids out of every orifice after those toddler years, they start spitting out teeth like an MMA fighter. My six year old lost her top two teeth this week after horrifying her grandparents for the week prior when both teeth were flopping around like a pair of swinging doors. This amused me, mostly because my dad is very rarely squeamish and he was just that every time his favorite little body came running at him with her tongue pushing her teeth in and out of her mouth.

Somehow I remember losing all of my teeth within a short time period. Maybe it was because I was closer to puberty than kindergarten when I finally lost my baby teeth. My daughter lost her bottom two middle teeth a year ago and hasn’t had another wiggler since then. When one of her top teeth started wiggling a few weeks ago I was a little surprised that the other didn’t join in the fun. It took lefty a full week to get on board the getaway train.

The first of the teeth to go was pulled out by a piece of ciabatta when we decided to get a takeout from a local Italian restaurant. She immediately spit out the bread that was in her mouth and shoved it into my hand. So much for the end of wet slimy things in my hands from my kid’s body. We spent the next ten minutes sifting through the pasta, chicken and bread on her plate and even the salad that was a foot away when the tooth came out. We never found the tooth and determined that she must have swallowed it. She immediately asked how we would get it back. It was somehow confusing to her when I said we wouldn’t get it back. She was incredulous that I would not be spending the next morning sifting through her poop for the tooth. I think she may have actually been testing me a few hours later when she stood up in the middle of our Friday night movie and said “I have to poop!” Instead of jumping right up I replied “I hope that tooth doesn’t bite you on the way out.” The poor kid actually looked frightened for a minute. I told her I was just teasing her and she relaxed until her Dad jumped on board and started making jokes. Sometimes he is a little late to the party. After we promised repeatedly that nothing was going to bite her little butt she finally went into the bathroom but not before asking one last time if I was sure I didn’t want to look for her tooth. The kid is nothing if not persistent. 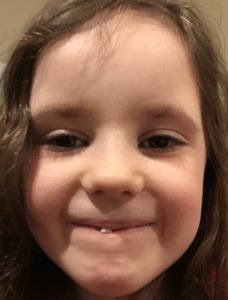 The stubborn tooth stuck around for a few more days. We spent New Years Eve making jokes about our little Nanny McPhee while I tried to get my hands on the wobbly tooth and give it a good yank. By New Years Day night I was getting worried that she would be swallowing yet another tooth, this time while she slept. As we were getting ready for bed she was playing with the tiny tooth now hanging by a string constantly. I couldn’t clear my head during our nightly meditation, instead I was plotting how to sneak back into her room and yank the tooth without waking her up. Luckily I didn’t have to plan for long. Right before I left her room to let her doze off she jumped up and spit her tooth out into her hand. She said she had sucked on it until it finally came out. The fact that there was no blood at all was proof enough that it was long overdue to make it’s escape.

After getting her tooth ready for the tooth fairy she climbed back into bed and asked if the tooth fairy would know about the other tooth that was swallowed. She wanted to make sure she was going to get paid for both, even if she wasn’t going to turn over both teeth. This kid is going to be a union steward or attorney when she grows up! She went on to say “that tooth can’t defeat all that water and juice and blood in my stomach!” as if to reassure herself that the tooth would not in fact bite her. Or maybe she was emphasizing that her stomach was to blame and not her negligence, just in case the tooth fairy had any doubt. She finished with “It’s like a super storm in there!” Strangely enough, the tooth fairy not only paid her for both teeth, she also left a note saying she was sorry little Nanny McPhee swallowed one of her teeth and assured her it would not harm her in any way. Man, that tooth fairy is even better than Santa Claus – generous and observant!

I wrote most of this post while listening to: